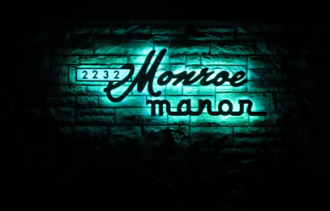 The terraced multi-unit apartment building was built in 1949 and is located at 2232 Beechwood Drive in Hollywood. Over the years the neon sign on the front of the building had been “updated” to LEDs, but those had failed and the sign had gone dark. The owners (Melco Properties) contacted sign restorer Paul Greenstein, to restore the sign. The sign had significantly decayed over the years. Greenstein removed the LEDs, stripped the paint, and epoxied the pieces back together (where original solder had disintegrated). He then repainted the metal letters in the original blue (found by matching the lowest layer of paint). Because the neon was gone there was no evidence of its original color. However, the building’s owner remembered that it has been “turquoise,” so Greenstein had neon made to match and installed the sign back on its original wall.